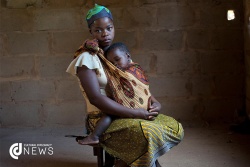 Therese Kachindamoto is the paramount chief of Dedza district, in the central region of Malawi. She is the authority over more than 9000,000 people, and she has been a strong feminist leader, helping a lot of women and girls in her community.

Malawi is an African country with a very low Human Development Index, and that is the reason why a lot of families arrange child marriages - if the girls get married, they'll get out of the house and no longer be an expense for the family. This behaviour makes that more than half of the women in Malawi to marry before they reach 18 years old, and to get pregnant before 12, according to a United Nations survey. This ranks Malawi as the 8th out 20 countries with the highest child-marriage rate in the world.

This type of situations depletes the female voice on Malawi society, and lead to concrete consequences like the raising of HIV victims, as well as sexual abuse victims (it's believed that it's the case of one in every five girls in Malawi).

It's for all these reasons that Therese Kachindamoto's work is so important. After meeting with 50 sub chiefs and making them sign an agreement, she established the age of 18 as the legal age to get married, even with a parent's signature; and right now, she is fighting for that age to be raised to 21 years old. She canceled more than 850 forced marriages; and is making sure young girls go to school, funding their education.

Because of her audacity, Kachindamoto has already been threatened with death-threats, even by other politicians who are against her policies. This is a very delicate situation in Malawi, because it goes against traditions and manners that have existed forever. Anyhow, the feminist chief stated that she is not afraid and that she will keep fighting until she dies.