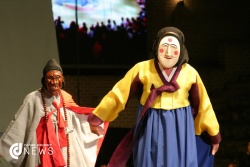 Andong Maskdance Festival, a noteworthy cultural event held every year, will take place this September in Andong, South Korea. Prior to the festival, Filipinos have had the chance to experience the joy of Korean traditions first-hand, when Korean mask dancers, mask makers and curators visited the Philippines between August 6th and 10th.

The event was organised by the Philippines’ National Commission for Culture and the Arts (NCCA) and The Andong Festival Tourism Foundation (AFTF). NCCA, the Ministry of Culture in the Philippines, hopes the event will promote cultural exchange between the two countries.

During their visit to the Philippines, the AFTF group hosted mask dance workshops and several performances, sharing the richness of their mask tradition with their Filipino audience. In addition, an exhibition of masks from around the world was displayed at the SM Mall of Asia Music Hall, showcasing not only the mask tradition of South Korea, but also those of other countries around the world.

Their trip also included a cultural tour of the Walled City of Intramuros and a number of museums, enhancing mutual cultural exchange.

The Andong Maskdance Festival celebrates Korean’s mask making and dancing traditions in the Andong region, a particularly culturally diverse region of South Korea. The vibrant cultural traditions and heritages represent Korea from ancient times to the present. For the past six years consecutively the festival has been recognised by South Korea’s Ministry of Culture Science and Sports as the festival which best represents the cultural heritage of South Korea.

Just as the Koreans came to perform in the Philippines, Filipino troupes will present their traditional dance at Korea’s Andong Maskdance Festival as well.

Apart from the Philippines, representatives from all over the world will perform their traditional dances at the festival, making the event a cross-cultural feast. Countries participating include China, Egypt, India, Indonesia, Israel, Japan, Kazakhstan, Malaysia, Mexico, Philippines, Russia, Singapore, Sri Lanka, Taiwan, Thailand and Vietnam.