Uniting People Through Culture and Cuisine in Chile

Intuition, Creativity and Knowledge: The Key Essences of the Ideas Boragó[edit] 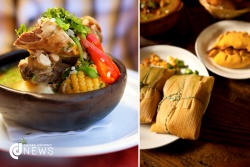 For several years, the restaurant Boragó has been ranked as the most influential in Chile, one of the most respected in Latin America and also one of the most valued in the world. Chef Rodolfo Guzman’s secret is that he is not only innovative with food, but also thinks in culture, works with philosophy and leads a revolution in the local cuisine.

The flavors travel from one corner of Chile to another. The colors, flavors and textures are surprising. On the one hand, an international food critic can eat covertly whilst culinary students are unable to figure out the chef’s secrets. On the second floor of the restaurant Boragó, however, everything changes. The dark lighting is reminiscent of Rembrandt’s paintings; the rows of books evoke the feeling of a public library; the jars of catalogued herbs would fit in well in the study of a master herbalist in the eighteenth century; and the blackboards covering the walls of the room are full with a multitude of notes which could have been written by a scientist trying to solve an equation.

In this space, restricted for many, the chef Rodolfo Guzmán, perhaps the most important in Latin America today, speaks not only of cooking, but also talks about the results of anthropological research, long conversations with biologists, the cultural heritage of indigenous peoples and their experiences in innovation, encouragement of creativity, and development of intuition.

It is known for the fusion of society, culture and cuisine, which unites people. Guzmán wanted to create a restaurant which was unique and Chile was a the ideal location due to the availability of the highest quality ingredients, such as marine products, wild fruits, fungi and algae. So he began a long journey: the long learning process which was the beginning of this restaurant.

Besides innovating every day in his laboratory of ideas, Rodolfo Guzmán divides his time between writing three books, publishing projects in parallel with biologists and anthropologists, and generating papers which contribute to the development of food culture. He says: "this is much more than a business, is something else, is not only a money exchange for food, not about that at all, is to demonstrate how the union of people through food and culture is possible.”