Vukovar Recieves a European Museum of the Year Award 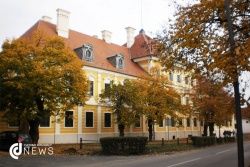 The municipal museum of Vukovar is the winner of the prestigeous European award „Silletto 2016“ for succesful engagement of local communities and volunteers into its work. Silletto is the second most important award of the European Museum of the Year Awards (EMYA).

The award was founded in 1977 by establishing the European Museum Forum, which for 39 years selecting the best museum to clearly defined criteria.

Considering that the Municipal Museum of Vukovar marks 70 years since it was established, this award is one of the many confirmations of hard work invested in its development and presentation of a valuable cultural herritage. It has come a long way from the destroyings and persecutions during the Independence War of Croatia in 1991.

The permanent exhibition of the museum has been opened since January 23rd of 2004, and it is spread over almost 3000 m2 within the Eltz Castle on the bank of the Danube, as a unique part of the project of the Republic of Croatia and Bank for Development of the Council of Europe, under the name of „Restoration and revitalization of cultural herritage Ilok-Vukovar-Vučedol“, conducted by the Croatian Ministry of Culture.

The castle was almost destroyed in the war of 1991. Since 1997, after the end of the war, the museum, which had existed as a museum in exile, has been an active force in reconstructing social and cultural life in Vukovar. Barely 17 years after the end of the armed conflict, the Vukovar Museum presents tragedies of the past as things to be avoided in future, not in a spirit of revenge or glorifying military action, but concentrated on people’s suffering and the need for peace-keeping.

In some circles, this prestigious award is also known as a „museum Oscar“, and it is exceptionally important for international promotion and networking of the Municipal museum Vukovar into the museum community.

The award gave a strong encouragement to all previous endeavors of the Vukovar City to bring the renewed cultural heritage closer to the potential visitors of Croatian and European territory, to perceive Vukovar as a city of wealthy cultural history, a symbol of suffering, and a symbol of peace. Also, it wants to present the efforts of the City to make Vukovar the city of the future and a city desirable for living.