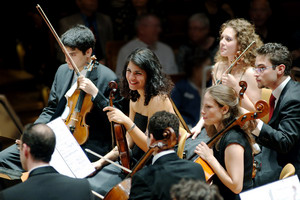 Daniel Barenboim and Edward Said founded the orchestra in 1999 as a workshop for Isreali, Palestian and other Arab musicians. The orchestra is based in Seville, Spain and has performed around the world. The aim of the orchestra is to promote understanding between Isrealis and Palestinians and to lay the foundations for a peaceful and fair solution of the Israeli-Palestinian conflict. In 2005 the orchestra performed in Ramallah, their first event in the Occupied Territories. For many Palestinians in the audience, this was the very first time they encountered Isrealis in a non-military setting. A young girl who saw Barenboim said: "You are the first thing I've seen from Israel that is not a soldier or a tank." The West-Eastern Divan Orchestra aspires to total freedom and equality and on this basis they come together and play music. Using music as a tool to promote understanding between Isrealis and Palestinians, is definitely an act of cultural diplomacy.