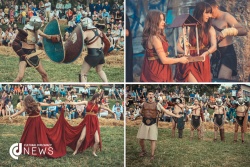 The Transylvania History Days represent an opportunity for History enthusiasts not only in Romania, but also in East Central Europe, to interact and participate in a unique exercise of history.

Transylvania History Days - hosted at the end of July in Romania's second largest city - represents the gateway towards enhancing mutual understanding between people from across the continent.

Creating a platform to educate about Romanian history and values was the core element of the event, which determined the Center for European Dialogue and Cultural Diplomacy, the UN Youth Association of Cluj and Babeș-Bolyai University to host such an event.

Local authorities supported the festival; according to the organizers, more than one thousand people attended the event.

Archery, blacksmithing, embroidery and tailoring interactive workshops were the main attraction. Moreover, the public was sent back in time with unprecedented sessions of dance, music and theater.

History is an integral part of culture, and culture represents an essential part of diplomacy. Therefore, it is rightful to say that this event is one of those that not only promoted national history and values, but also culture and cultural dissemination.