"Plan Ãfrica": the New Initiative of the Instituto Cervantes 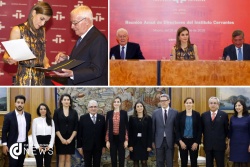 Institute Cervantes is a public institution attached to the Spanish Secretary of Foreign Affairs. Its main function is to promote Spanish and other languages in Spain – Catalan, Euskera and Galician – and to diffuse the Hispanic culture around the globe. Nowadays, it is the most important institution when it comes to Spanish-speaking culture as it equally promotes, with great vocation, the Latin American Culture. It carries out significant activities worldwide and this year they have a plan to spread Spanish throughout Africa.

Her Majesty the Queen Letizia of Spain presided the act in the central headquarters in Madrid. She remarked the importance of the institute as it empowers and promotes not only the Spanish culture from Spain but from Central and South America as well. She noted that nearly 70% of the institute’s activity is in collaboration with other Latin American public institutions.

On the other hand, the President of the Institute Cervantes, Victor García de la Concha, presented "Plan África" during the last annual meeting of the institute. He remarked that the institute should open an orrice in Africa in order to ensure a project of cultural prosperity.

The principal formula is to open a new headquarter or to share a building with other similar institutions such as the Goethe Institut. Nowadays the only headquarters are located in the African Magreb (Marroco, Tunisia, Algeria and Egypt) and in Dakar, Senegal.

The plan seeks to spread the Spanish language to all the countries in Africa. Another area of expansion is Asia, where the demand for learning Spanish is growing.