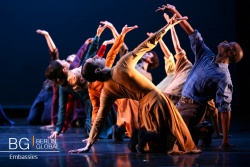 The 26th edition of the international dance festival was co-organized by the French Institute in Berlin, The Kingdom of the Netherlands and the Canada Council for Arts. The special focus of this year's festival was on the affinity between the visual arts, the Asian dance scene and the local Berlin scene.

The festival was once again organised by Virve Sutinen, who studied Performance Studies in New York and headed leading dance institutions in Helsinki and Stockholm for many years. Sutinen represents different generations of artists and the aesthetics of humor and experimentation. In addition to large companies, she presents a number of newcomers and Berlin debuts.

This year, the focus is on contemporary classics and new works by both international choreographers and those from Berlin. Intimacy, collectivity and the experiences of belonging and exclusion are issues around which the positions of 24 artists revolve. Special attention is paid to the affinity between the visual arts and dance. For the first time there will be a retrospective dedicated to the British choreographer Rosemary Butcher. Another focus is on the growing Asian dance scene. A novelty of this year's festival is the integration of choreographers from Berlin, which sets a clear commitment to the local dance scene.

The program is characterized by artists from several generations and invites its audience to discover numerous artists who are hardly known in Berlin.

The festival also hosts a special library: a temporary reading room to introduce the worlds of the artists. It is a dedicated space for people to meet and exchange ideas. Open throughout the festival, its collection includes books suggested by the artists involved in Tanz im August 2016. The organizers have asked the artists to name three volumes that they believe can serve as reference books for their work.