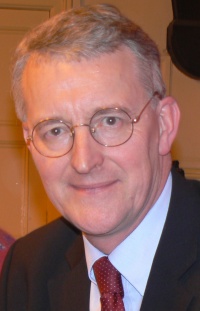 Hilary Benn started his political career when he contested the Ealing North Seat in both 1983 and 1987 General Elections. Following Labour's 1997 General Election Victory, Benn was appointed as special adviser to Rt Hon David Blunkett MP. In June 1999, he was elected as Member of Parliament for Leeds Central. June 2001, He was appointed as Parliamentary Under-Secretary of State for International Development. Between May 2002 and May 2003, he was Parliamentary Under Secretary of State for Community and Custodial provision at the Home Office.

In May 2003 he was appointed as Minister of State for International Development and in October that year entered the Cabinet as Secretary of State for International Development. While at DFID, Benn played an important part in increasing the UK’s aid budget and in winning agreement on debt relief for the poorest countries at the 2005 Gleneagles Summit. He oversaw the UK’s response to the South-East Asian Tsunami and the Pakistan earthquake, and it was his idea that resulted in the establishment of the UN central emergency relief fund which now helps the world to respond better to disasters. He also led the UK negotiating team at the 2006 Darfur peace negotiations. Hilary Benn was appointed to DEFRA as Secretary of State in 2007, when Gordon Brown became Prime Minister and leader of the Labour Party. At DEFRA, he helped to put the ground-breaking Climate Change Act on the statute book, and piloted the Marine and Coastal Access Act - which will protect out marine ecosystems – into law. He also created the South Downs National Park. Following the 2010 General Election Hilary became Shadow Leader of the House of Commons before being appointed as Shadow Secretary of State for the Department of Communities and Local Government in October 2011.