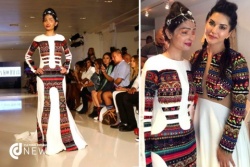 Indian teenager, Reshma Qureshi, walked the New York catwalk to cheers and applause last week. She was invited to take part by FTL Moda, a fashion production company committed to challenging industry stereotypes of beauty. Last year the company invited a model with Down Syndrome to take part.

Qureshi, whose ambition remains to finish the last two grades of high school and go to college, said she hoped her participation would send a powerful message to other acid attack survivors. The night before the show she said, “Why should we not enjoy our lives? What happened to us is not our fault and we've done nothing wrong and so we should also move forward in life."

Acid attacks, which overwhelmingly target women and children, are a particular scourge in Southeast Asia, sub-Saharan Africa, the West Indies and the Middle East. As slim as any professional model and with thick, luxurious hair, she appears in YouTube videos offering beauty tips and make-up advice, filmed in her home city of Mumbai. Just moments before hitting the catwalk she clung to the arm of a floor assistant. But with her hair swept into a chignon with a delicate headpiece, professional make-up and her model frame flattered by the curves of the gown, she quickly turned into a natural. “I want to tell the world -- do not see us in a weak light and see that even we can go out and do things,” she said. “People have a tendency to look at acid attack survivors from one perspective and I don't want them to look at them like that anymore." Backstage she was embraced by a fellow model and then lent over the balcony watching part of the rest of the show.

As much as the audience of stylists, bloggers and members of the Indian diaspora whooped and cheered, Qureshi had come across on the eve of the show as rather overwhelmed and understandably jet lagged. “I feel really good and the experience was great,” she told after the show, speaking in Hindi through a translator. The 19-year-old, who lost an eye and whose face was brutally disfigured in an acid attack, brushed off nerves to stride the runway like a pro in a stunning cream and floral floor-length gown by Indian designer, Archana Kochhar, on the first official day of New York Fashion Week.

Tith her New York debut under her belt, Qureshi was much happier. She walked in a second show before heading out to dinner and was keen to see as much as possible of the Big Apple.