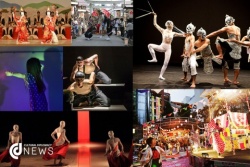 The International Performing Arts Event Festival of Tokyo is an intercultural festival which has taken place in the capital of Japan for the past nine years, and which offers the chance to get to know not only japanese culture, but also other cultures, including chinese, polish and german. The main aim of this event is to pioneer new possibilities by offering stimulating meetings that transcend nationality, generation and artistic style.

The theme of this year is “Beyond Borders” and the festival will last from 15th October to 11th December. The programme is varied and includes 16 productions in the Main Program and 14 productions in the Affiliated Program, with special focus on the work of Polish theatre giant, Krystian Lupa, whose work will be exhibited in Japan for the first time as part of Festival/ Tokyo 2016.

In this festival there will be different kind of performances, talks, films screenings, and many other events. The show is presented as a platform for connecting audiences with artists and performances are intended to reinterpret society, creating dialogues that break down the borders that separate us. The festival is also an opportunity for Japanese artists to present their work, to show their co-productions, born of international parternships and work that reassesses history through theatre.

The show will take place, not only inside conventional theatre spaces, but there will also be events outdoors in an effort to expand the reach of the performing arts.

This year the Festival/Tokyo Affiliated Program introduces 14 productions that will take place in and around Tokyo at the same time as the festival, with the aim of demonstrating the diversity of the city’s performing arts scene.