Germany and Mexico have created a mutual alliance to share cultural, economic, scientific and academic activities[edit] 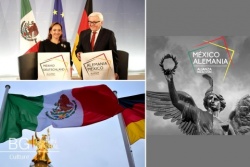 After 137 years of diplomatic relations, Germany and Mexico are closer today than ever before. From April 2016 to May 2017, the two countries will approach each other with the objective of consolidating mutual understanding and creating a common and sustainable future.

In 1879, Germany and Mexico established their diplomatic relations for the first time, and during the 19th century Mexican knowledge spread to Germany. Many merchants and artisans who felt attracted by such a different culture decided to move to Germany once Mexico had achieved its independence. Then, in 1941, diplomatic relations were broken after Mexico decided to join the Allies during the Second World War. Relations were restarted in 1952 following the end of the war.

In 2007, the two countries agreed to consolidate a strong political relationship based on the joint declaration of the intensification of mutual relations. Last year, during Mexican ex-chancellor Jose Antonio Meade’s visit to Germany, the Binational Commission was created.

There are many reasons why these two nations are looking for a strong bilateral alliance: there are currently around 13,200 Mexicans living in Germany and around 4,000 Germans who live in Mexico. This means that both countries need to maintain an open dialogue for the well-being of their emigrated population.

Their economies are also related as Germany is currently Mexico’s largest trading partner in the European Union, while Mexico is the Germans’ second Latin American trading partner. In fact, Mexico is the sole Latin American country which has a free trade agreement with Germany to protect investment and avoid double taxation. Also, if we look at tourism we will see that Mexico received around 221,526 German visitors in 2015.

As the reasons for their alliance are varied, the scope of the activities of the 2016 - 2017 Dual Year are also diverse and are centred around three pillars: trade, industry and tourism; education, science and innovation; and culture, arts and creative industries.

The different activities are supposed to help the countries to build a common future and face the challenges of our contemporary and globalized world.

In the meantime, people living in Germany and Mexico will be able to enjoy a multitude of activities which are taking place in institutions such as the Goethe Institute in Mexico City or the Academic Exchange Service (DAAD) in Germany.

The agenda with all the activities can be found at http://dualyear.mx/agenda