Norway and Germany Connected by the Green Link

The NordLink subsea cable will be the first bilateral project on renewable energy between Norway and Germany.[edit] 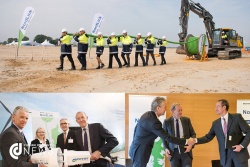 On September 19th, the project partners TennetT, Statnett and the KfW, celebrated the groundbreaking ceremony of the first bilateral project between Germany and Norway by the NordLink subsea cable project. Among the people attending the ceremony there were state and regional political representatives, the Norwegian Ambassador to Germany Elisabeth Waalas with the Schleswig-Holstein Minister of Energy, Robert Habeck, and the mayors of Wilster and Nortorf.

The NordLink project connects Germany and Norway with a transition of resources, such as the German solar and wind power on one part, and the Norwegian hydropower on the other.

The NordLink subsea cable is the tool to connect and facilitate this process in a safe and eco-friendly way, with a 1400 megawatts long cable, that will connect the two countries and create energy flow from the region of West-Agder in Norway and it will expand to Schleswig-Holstein (Wilster) in Germany.

Thanks to the NordLink co-operation, both Norway and Germany operate according to the EU climate policies, as this agreement enables a relation to be created between the two countries, engaged to the climate goals; the aim of the project is to reduce carbon emissions, which will also help to achieve the climate goals. However the project will also create positive effects on power prices, which will also improve socio-economic relations, based on mutual gain. Norway and Germany will divide the NordLink subsea project about 50 per cent each, where the Norwegian state-owned company Statnett owns 50 % of the project meanwhile the Germans companies, KfW and TenneT, will own the other 50 % of the project.

The Norwegian Ambassador, H. E. Amb. Elisabeth Walaas, expressed enthusiasm about the NordLink engagement, announcing – "This is a milestone in German-Norwegian energy relations. NordLink is taking the realization of the energy transition and the integration of renewable energy to a whole new level.”

However the Norwegian Ambassador was not the only political representative from Norway, present during the ceremony, two county commissioners and two mayors from the Norwegian region of Agder also attended the ceremony in Wilster to be part of this traditional German event.

Therefore, the energy agreement between Norway and Germany is the perfect opportunity for the integration of both countries in the North European market, but also the establishment of cultural cooperation and the responsibility towards a sustainable development in the world.