Norway at the Stuttgart Book Weeks 2016 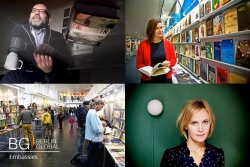 The book fair attracts around 300 exhibitors, publishers and approximately 100,000 visitors. Six Norwegian authors will give their insights into the Norwegian literature scene at the Stuttgart Haus der Wirtschaft: Gard Sveen, Kjersti Annesdatter Skomsvold, Liv Marit Weberg, Morten A. Strøksnes, Roy Jacobsen and Tore Rem. The fair will be accompanied by readings, lectures, the film ‘Norway Day’, and a photo exhibition “Architecture and Landscape in Norway” by Ken Schluchtmann.

At the beginning of the 66th Stuttgart Book Week, the audience will be able to, for example, meet Roy Jacobsen, one of the most widely read authors of the kingdom, who will present his novel ‘White Sea’. They also have the chance to meet Liv Marit Weberg, who will be representing children’s literature with her ‘Fortunately nobody needs me’ book.

In addition, the bookworms present photographs by Ken Schluchtmann. The selection of pictures have captured a unique combination of Norwegian landscape and architecture. A film series by the city media center with Norwegian productions and a ‘Norwegian Day’ complete the guest appearance.

The exhibition of books makes up the core of the book fair in Stuttgart, and Norwegian books will be given a prominent setting. Throughout the duration of the book weeks, the six Norwegian authors will take part in several readings and events, and there will also be art exhibitions and screenings of films related to Norwegian topics.