Talking About Food: Taking the German-Indian Relations to a New Level 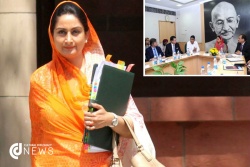 H. E. Ambassador Martin Ney, together with a few other diplomats, met the Indian Minister of Food Processing Industries, Harsimrat Kaur Badal. The meeting, which focused on India’s recent initiative to open food retail for Foreign Direct Investment, marks the starting point of a future collaboration in the Processed Food Industry Sector.

On August 3, the Ambassador of Germany in India met the Indian Minister of Food Processing Industry, Harsimrat Kaur Badal. A number of other diplomats coming from countries such as France, Poland, Australia, Italy and China also took part at the event.

The key subject of the discussions was the initiative that India has recently adopted, regarding opening the food retail for Foreign Direct Investment. The Minister briefed the diplomats present at the event about the vast opportunities available in India. She also shared the fact that the Ministry of Food Processing Industries would be providing facilitation for all foreign investors who would like to invest in the food-processing sector in the country.

As far as the Ambassador Martin Ney affirmed, Germany welcomes India’s initiative to open food retail for FDI. Actually, India and Germany have been partners in the food sector for a considerable period now, and this new initiative can only improve this cooperation.

While the discussion focused on the cooperation in the food sector, it can be also extended to the cultural and diplomatic field. Increasing cooperation between the two countries in the PFI sector shows the already existing strong bond between Germany and India can facilitate taking the next step in cultural cooperation.