The Olympic Games, a Beacon of Hope in the Hearts of Landless

Roaring Crowds welcomed members of the Olympic Refugee team at Kakuma camp in Kenya, a token of gratitude for their incredible humanitarian efforts[edit] 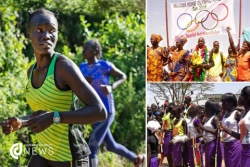 Athletes receiving a warm welcome in their home country after their Olympic performances is the norm in every corner of the globe, especially if they have been particularly successful during the two weeks of competition. For the Refugee Olympic team however, success is not measured by the amount of medals won, but by the effort made to represent more than 60 million people scattered all across the globe.

The Olympic Games have never been a pure and isolated demonstration of sporting prowess. The Olympic delegations sent all over the world are what the sending nations want the rest of the world to see, not a mere selection of the best performers of one country. In their performances athletes convey messages, either of personal or national importance, so much so that the Olympic Games are now used to tackle issues of global preeminence.

This year the focus was zoomed into the refugee crisis, with the participation of the Olympic Refugee Team to Rio 2016. Most detractors, only seeing the sheer size of the delegation, could think of a condescending symbol carried forward by the Olympic committee; the reality is far different from that, and the enormous celebrations hosted in the refugee camps where the members of the delegation have come from clearly demonstrate it. The landing of the 5 member from the Refugee Team at Nairobi’s airport and their subsequent arrival at Kakuma Camp was welcomed with touching and colossal celebrations. Through their performances, more than anyone else they managed to raise awareness of the refugees’ conditions in Africa and the Middle East. Cheering crowds treated these five athletes as heroes, notwithstanding the number of medals won.

For the 180,000 refugees currently hosted at Kakuma Camp, true gold does not come from a shiny platter of metal, but from the resilience to the hardships these athletes had to face throughout their lives, which allowed them not only to take part to the most important global sporting competition in the world, but also to drive the attention of millions of people to a pending world crisis.